No doubt Android is most likeable Operating System in the world. Due to having unlimited games and applications, it became very interesting for the people. A large quantity of people want access android from PC. Therefore now such type of programs are being made which can give us Android environment on our Computer. In this regard one of good program called “Remix OS Player” is ready to service. This program is different from its kind of other programs. 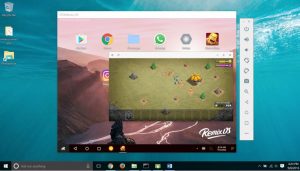 One of its unique thing is that you can install it in windows as app player or you can also install it like a complete operating system with Windows. In this way when you turn on your computer, it will give you a choice that either you want to run Windows or Remix Operating System. Actually such emulators which play in Windows re not completely free. Due to which not only affected but but also other apps do not work properly. However in Remix you get both type of options and they both works best. In other words to access Android from PC, Remix OS Player is a smart program.

If you want to use Android games & Applications on your computer, download “Remix OS Player”. With the help of this program, you can enjoy Android environment on a big screen of your computer. The size of this program is about 750-800 MB which is not a beg deal.

This program provides you feel of Android on Desktop. Interesting thing is that it automatically include Mouse & Keyboard so that you can use it easily. As you have access to Google Play Store by using this program, so you can download and install games and applications whenever you want. So again if you want to access android from PC, don’t forget to Remix OS Player.

There are many features available in this program. So before download, it will be good to go through from the all details. Specially choose a right program at the time of download. As this program is available in Remix OS Player and Remix OSP separately.

This is Asad Ullah. I have done Master of Arts (Mass Communication) and two years diploma in Multimedia. Graphics Designing is my passion. Furthermore, web Designing, Audio Video Editing, 2d Animation, 3d Modeling, Blogging, Online earning are also my fields of interest.
Previous A Best Free Antivirus for Windows Mac Android & IOS
Next Use your all Cloud Storage space together

To play games on Facebook is going to be a favorite hobby of the people. …